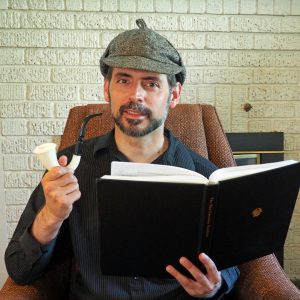 Saint Paul Public Library librarian János reads "The Coin of Dionysius" by Ernest Bramah from The Rivals of Sherlock Holmes.

As the Golden Age of Detective Fiction emerged in the wake of Arthur Conan Doyle's Sherlock Holmes stories, it behooved authors to distinguish their character both from Holmes and the other crimesolvers proliferating in the pages of magazines.  Ernest Bramah was one of the first to give his character a physical disability.  In this tale he introduces Max Carrados, whose chance encounter with a private inquiry agent is an opportunity to prove that blindness is no impediment, and possibly even an asset, in detective work.

Max Carrados might be literature's first blind sleuth, but what really elevates Ernest Bramah's storibes are the humanity with which he imbues the character, and the zingy wit of the writing.