While our buildings are temporarily closed to the public, we are here for you. Learn more about Saint Paul Public Library resources at sppl.org/staying-in 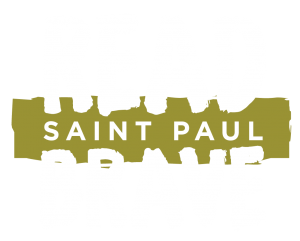 Read Brave Saint Paul is a new twist on the traditional city one-book program. Rather than a single book, the program revolves around a common theme relevant to our city. All readers — from our youngest children to our elders — are encouraged to engage in the program through reading, discussion, programming, and action. The 2020 Read Brave theme is “Our Climate Crisis.”

For 2020, The Marrow Thieves by Cherie Dimaline is the primary pick, and Climate Justice by Mary Robinson is the nonfiction pick. Learn more about Read Brave Kids below.

Get the latest Read Brave news. 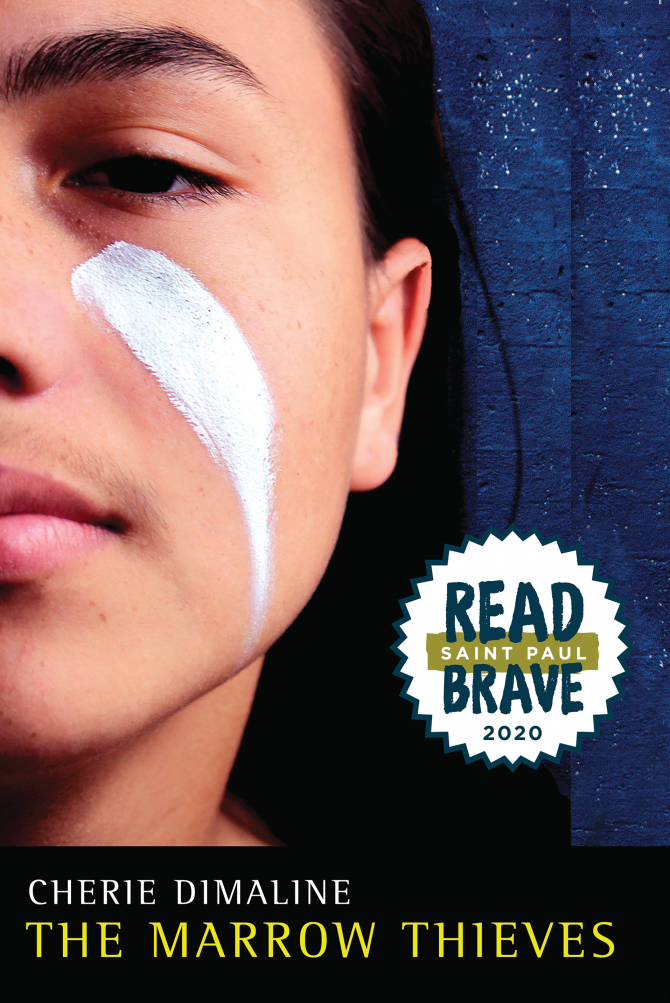 The Marrow Thieves, by Canadian Métis author, Cherie Dimaline, is this year’s primary book selection. A 2018 Canada Reads finalist, the young-adult novel imagines a dystopian future where global warming has ravaged the earth and, with it, most people’s ability to dream. Indigenous people, who can still dream, are hunted for their marrow to create a serum for others. The story follows Frenchie, a teenager on the run. After his brother is captured, Frenchie must create an ad hoc family and fight to preserve his people.

Watch a short introductory 'hello' from Cherie Dimaline to readers in Saint Paul. 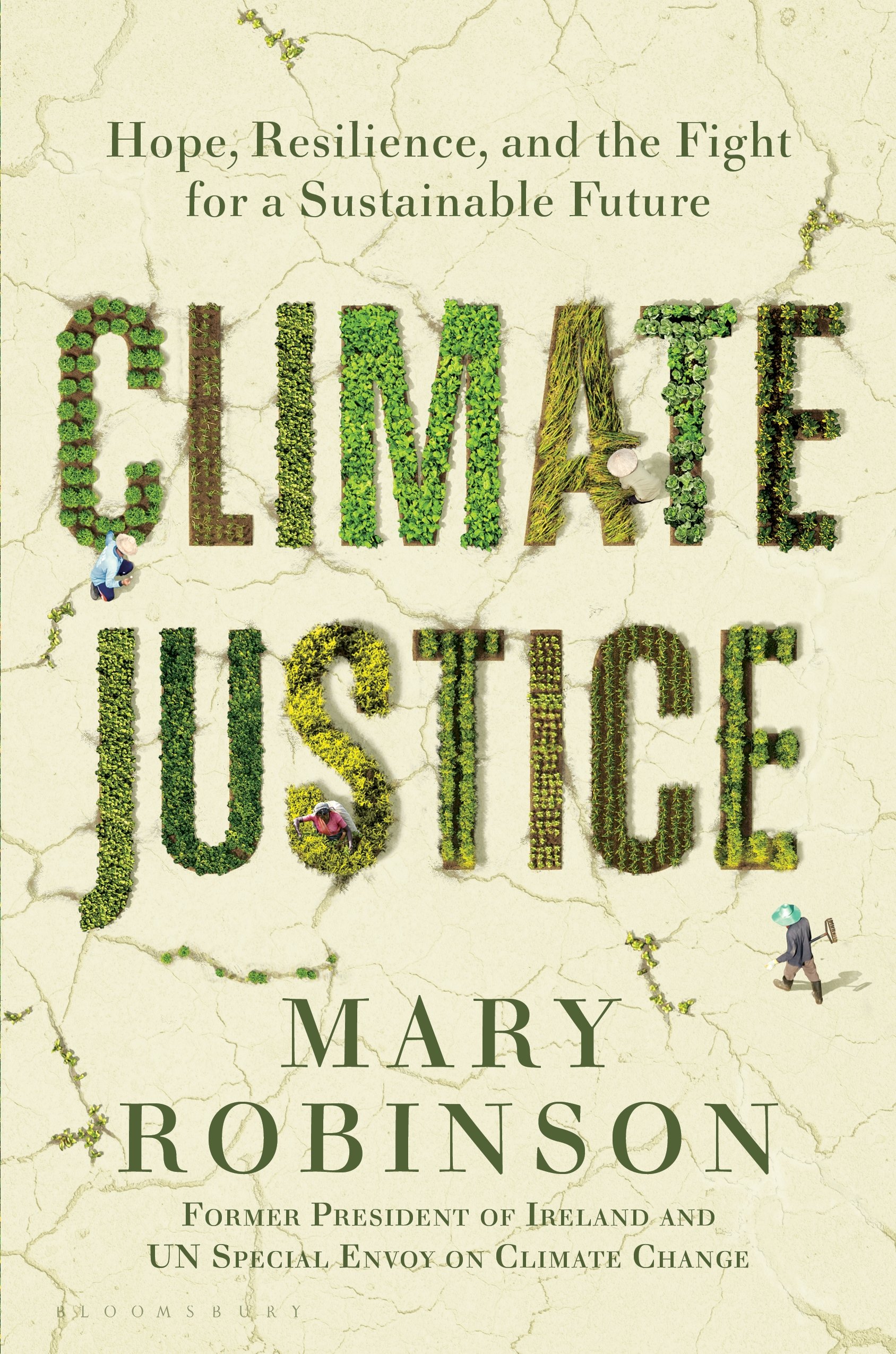 Climate Justice: Hope, Resilience, and the Fight for a Sustainable Future, by Mary Robinson, the former President of Ireland, is this year’s nonfiction selection. Robinson gives voice to farmers, activists, and ordinary people worldwide who are facing the effects of the climate crisis with courage and innovation.  Her book acknowledges the hardship and uncertainty environmental degradation has had on traditional ways of life and celebrates the resilience of people who have worked for sustainable solutions.

Watch Mary Robinson's TED Talk on "Why Climate Change is a Threat to Human Rights."

Get a FREE library card.

Visit our library card FAQs to learn more about how to get your FREE Saint Paul Public Library card.

How to participate in Read Brave Kids Expand

Read and rate the books at school or at home. Tell someone about what you read! 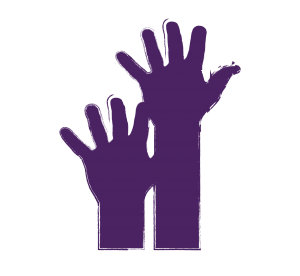 Vote for your favorite book starting in February 2020 online or at the library. 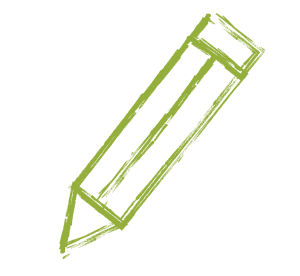 Create art based on your favorite book or the theme and enter to win cool prizes! Winning artwork will be featured on Saint Paul Public Library cards this spring. The deadline is February 15, 2020.

We are proud to announce the winners of the Read Brave Kids library card art contest. Art was inspired by the environment and natural world.

Follow along for the latest news about Cherie Dimaline's visit to Saint Paul.

Join author Cherie Dimaline for two public events this week including a Q&A and book signing.

Come to the library and screen brave films focusing on our climate crisis with a facilitated discussion afterward. 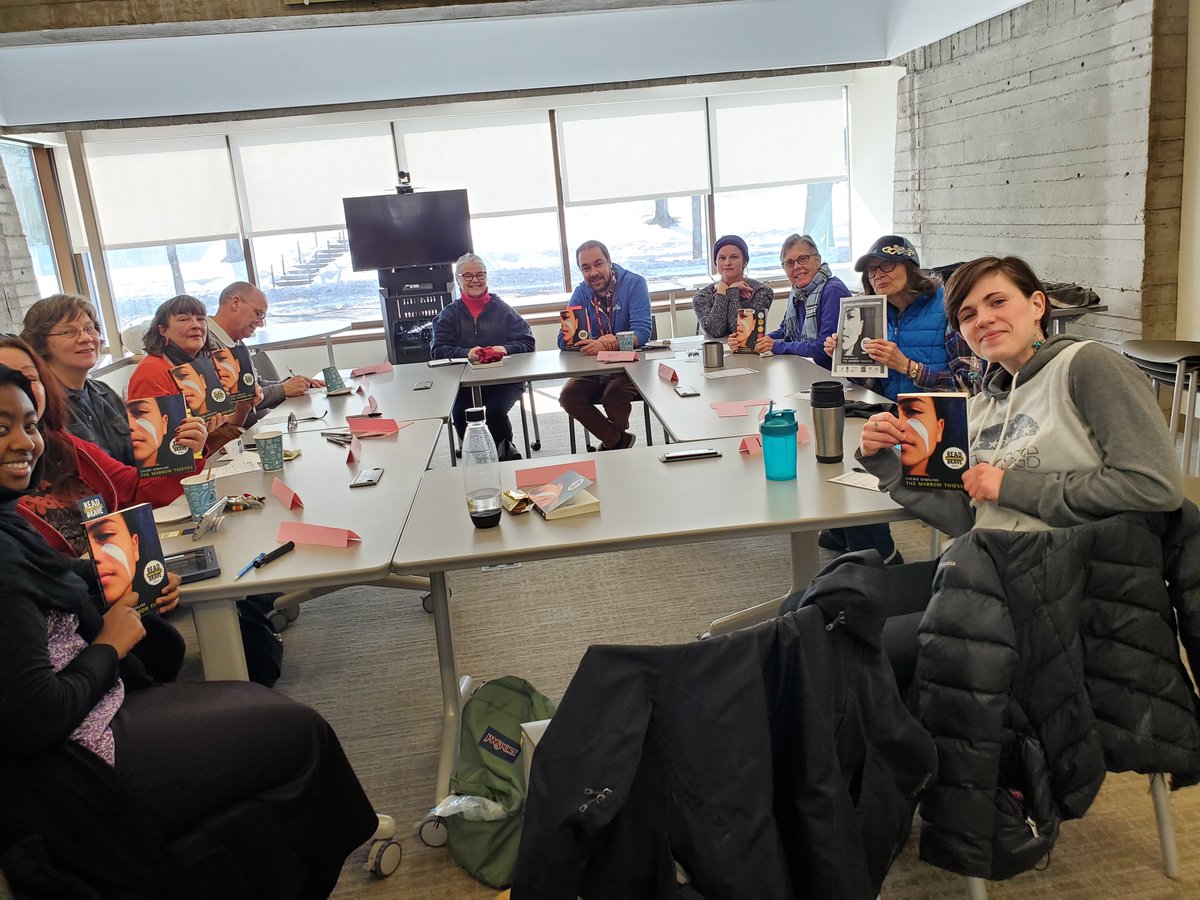 In 2018, some 13.6 million people were uprooted from their homes, cumulatively adding to a record 70.8 million forcibly displaced.

Posted by Ann Griffin
@Ms_GriffinFirst
Thanks @stpaullibrary for supporting our first graders with #READBRAVE books. We learned so much about taking care of our environment, we created our own mural to showcase our learning @GlobalArtsPlus @SPPS_Science @MsManthe 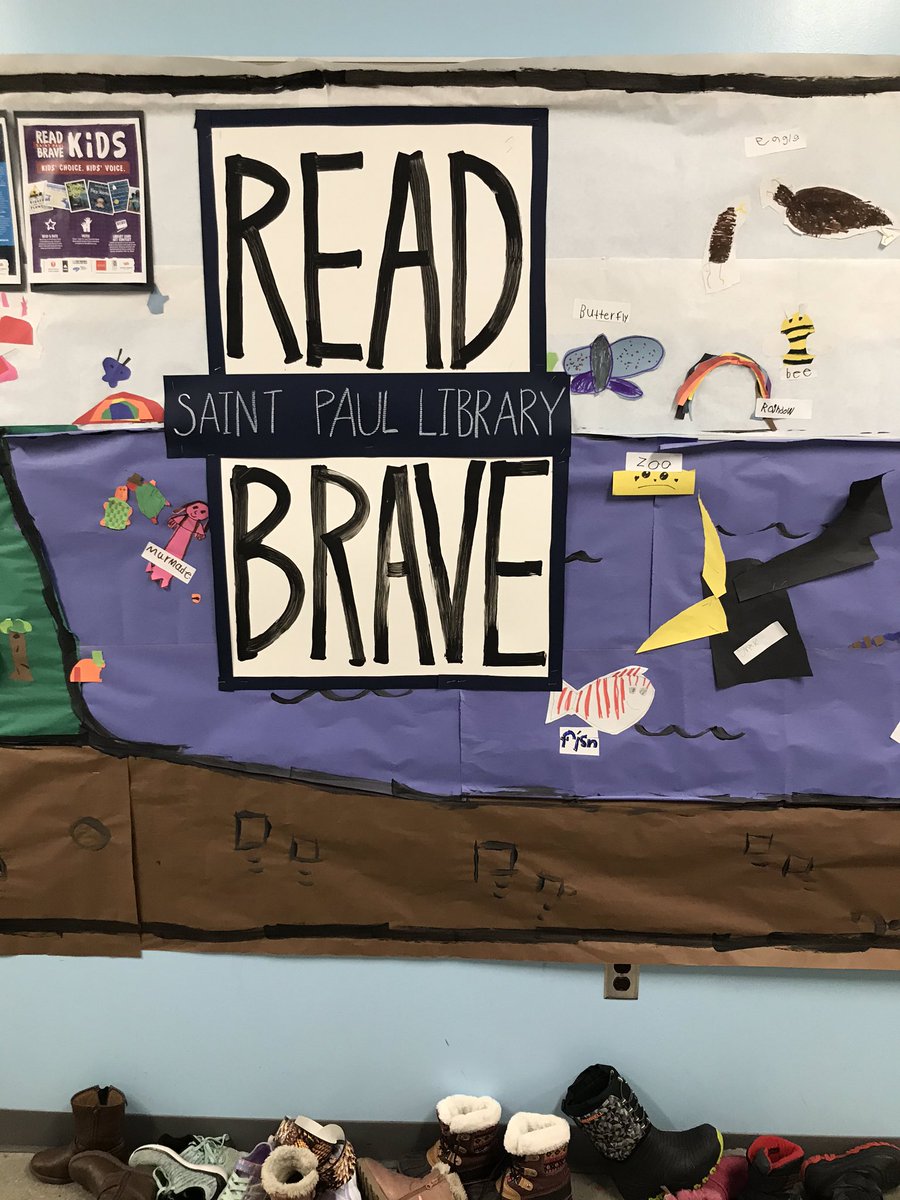 Posted by Eric Holthaus
@EricHolthaus
So excited to work with the @stpaullibrary to help organise community-level conversations about this necessary moment we have to transform and protect the one planet we all share.
Posted on 12:54 AM - 29 Jan 2020
Reply 2 retweet 15 likes

McKnight Foundation on Twitter: "Thanks to @thefriends for sharing…" | 2293728

Posted by McKnight Foundation
@McKnightFdn
Thanks to @thefriends for sharing copies of @stpaullibrary’s #ReadBrave #OurClimateCrisis books with us! Our staff is excited to dive into these stories and join the @cityofsaintpaul and its residents in working toward #ClimateSolutions! 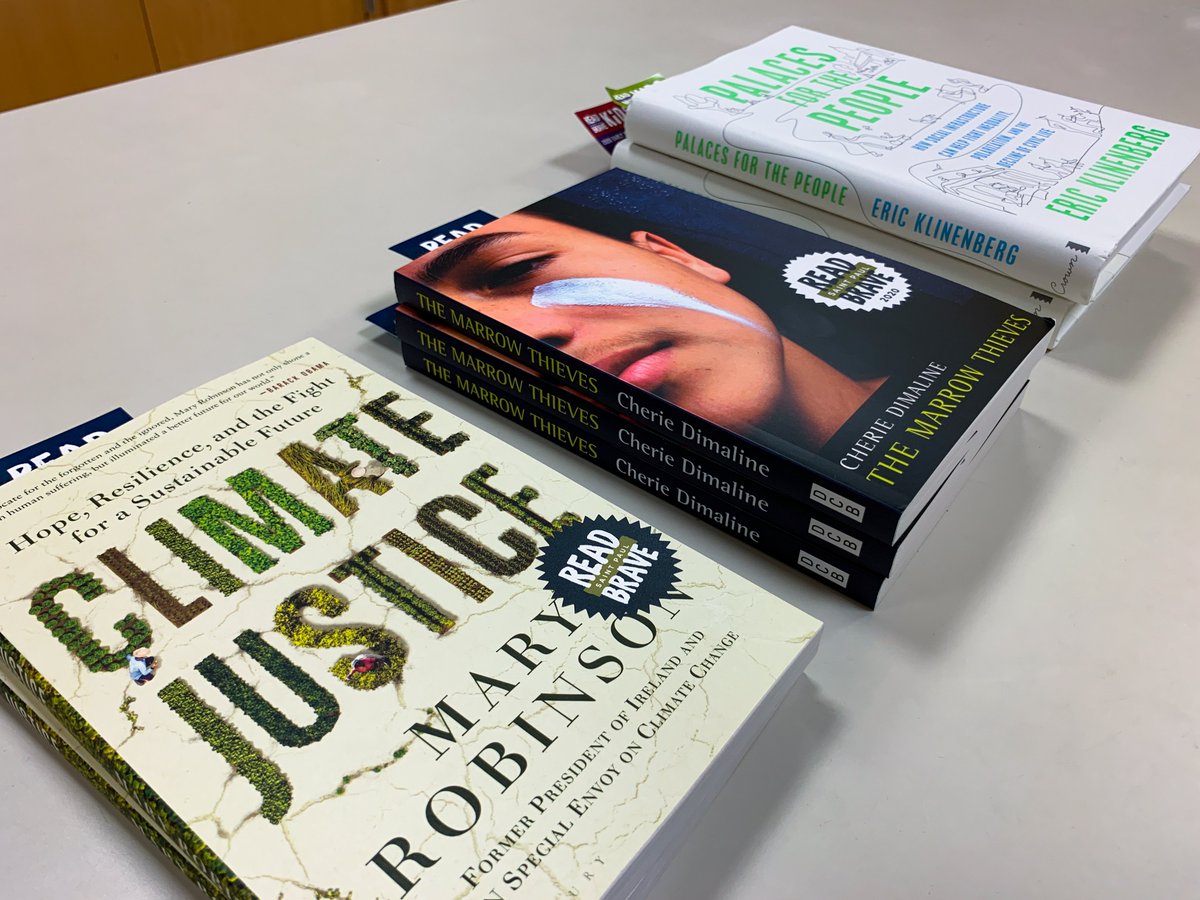 Posted by Dr. Kate Knuth
@kateknuth
I love this civic capacity-building work on climate that is happening in the @stpaullibrary system.
Posted on 2:55 PM - 22 Jan 2020
Reply 1 retweet 2 likes

Why Lake Superior Is Rising and What That Means for Duluth

The Great Lakes, to which Duluth owes so much, are changing as a result of slow geological processes as well as rapid climate change.

America is warming fast. See how your city’s weather will be different in just one generation

Survival by Degrees: 389 Bird Species on the Brink

Two-thirds of North American birds are at increasing risk of extinction from global temperature rise.

How climate change will impact the Boundary Waters

The Boundary Waters may seem unchangeable and stoic. But humankind's actions over time are far too much for nature.

Read Brave is also supported by the Katherine B. Andersen Fund, and the Saint Paul Saints.