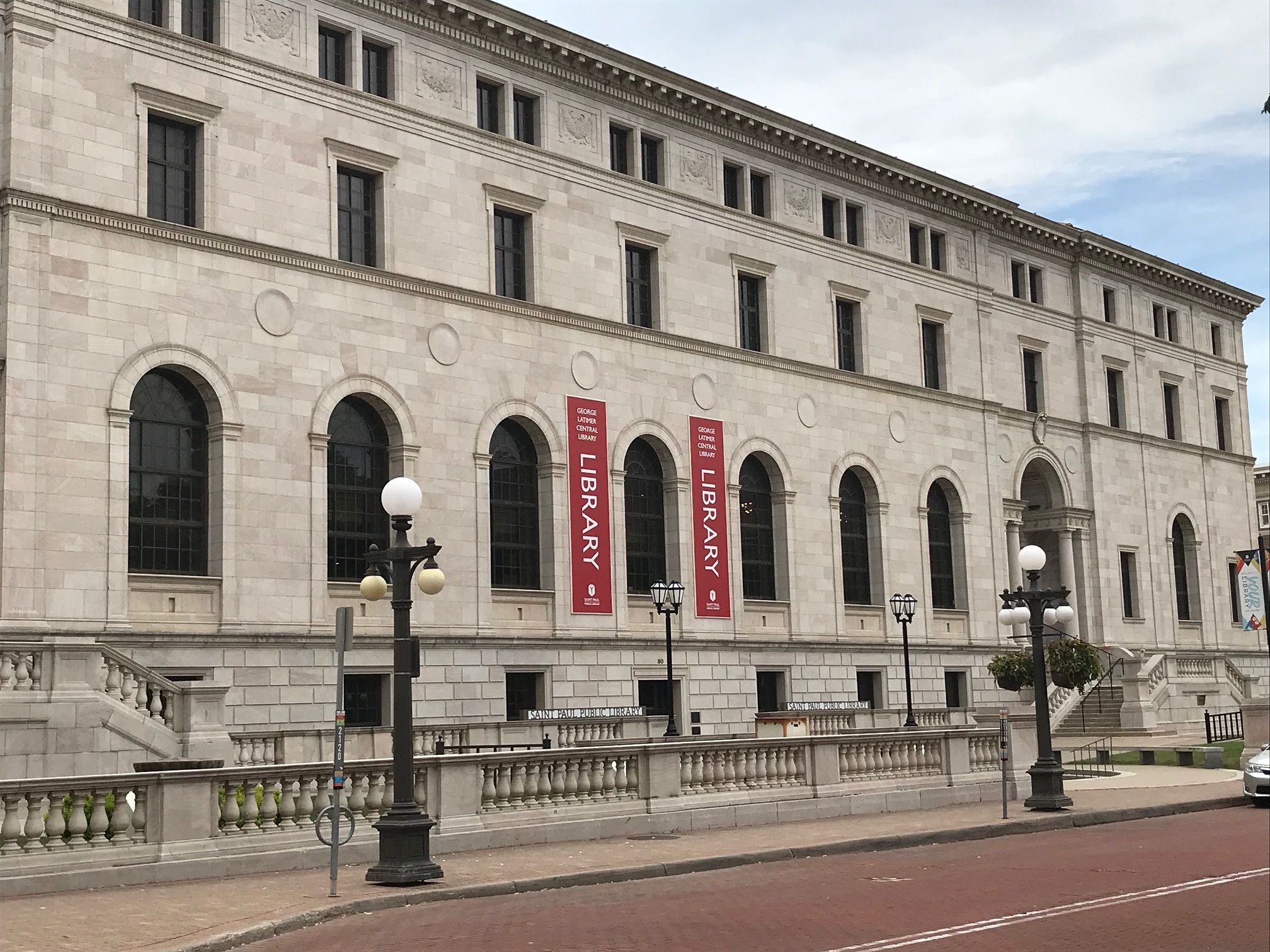 Microfilm machines will be unavailable on Sunday, February 5.

The Saint Paul Public Library traces its earliest beginnings to 1856 when the first private reading room opened in the city. In 1863, the Saint Paul Library Association was formed, and in 1879, under the leadership of Alexander Ramsey, the Association proposed that the City accept responsibility for their collections and establish it as a free public library.

On September 7, 1882, the city council established the Saint Paul Public Library with a collection of 8,051 books.

In 1900, the library moved to the old Market Hall, located on Seventh Street. Many civic leaders pushed for the construction of a new building, but the library remained in the Market Hall until a fire destroyed the building in 1915, including the library and its collection of 158,000 books.

Planning for the new Central Library occurred well before the 1915 fire. In 1909, work began on a new building, and the next year, the library's site on Rice Park was chosen. Railroad baron James J. Hill offered to contribute funds for a reference library attached to the public library, and additional monies were raised through a subscription campaign, a bequest from Greenleaf Clark, and the sale of bonds. Finally, ground was broken for Central Library in 1914. The entire building, including the Hill Reference Library, was completed in 1917 at a cost of approximately $1.5 million.

Electus Litchfield was first suggested by his uncle, Reverend William C. Pope, and later by James J. Hill, as the architect of Central Library. By late 1912, Litchfield had been officially selected as the architect. Born in 1862, Litchfield had studied at the Polytechnic Institute in Brooklyn and the Stevens Institute of Technology. Later, he studied architecture with the New York firm of Carrere and Hastings, designers of the renowned New York Public Library.

Litchfield's design for Saint Paul's Central Library also was heavily influenced by the design for the new J. P. Morgan Library in New York, completed in 1906.

The Central Library was designed in the Italian Renaissance Revival style. Some features marking the style include the round-arched windows, the Palladian style entrances, the large stonework, the balustrade surrounding the building, the rondel features near the arched windows, use of classical columns and pilasters, and the cornice capping the structure. The style was continued throughout the interior of the library.

The exterior of the library is of Tennessee marble, while the interior is finished in gray Mankato stone. Blue Rutland and golden vein Formosa marble are also used in select areas.

The original woodwork in the building is a gray stained maple. The floors of the three main rooms were originally of compressed cork, which was recreated in a renewal project completed in 2002.

The Kellogg Boulevard courtyard, including a new entrance, was also redesigned during the renovations.

The library's entryway lobby leads to the Otto Bremer Community Room, renovated in 2013, and, across the hall, to the Peter J. King Welcome Center, renovated in 2015-2016. The Youth Services area occupies the west wing of the first floor. Previous renovations here sought to capture the character of the original children's and teen areas. For example, note the historic stone arch doorways marking entrances to the youth areas.

The Skinner Teen Room, named for library benefactor James H. Skinner, opened in 1939. Designed by local architect Magnus Jemne, the room quickly became a national model for service to teens. In 1950, the Skinner family commissioned the carved sculpture of owls in the room as a memorial to William W. Skinner, Jr. who was killed in World War II.

The puppet stage in the Children's Room was designed by Magnus Jemne in 1949. The stage is made of bleached walnut from southern Minnesota and features a carved head of Loki, the god of mischief in Norse mythology.

On the second floor, the Nicholson Commons is one of the architectural highlights of the library. Featuring large, arched windows, the room originally served as the main reading room. Angel friezes adorn each end of the room. The paintings on the ceiling beams depict publisher marks from the 1910s, along with the initials of the Saint Paul Public Library.

Near the center of the room, there is a portrait memorializing Ray Tatar, shown wearing a beret, who tragically died in a fall while working on the restoration of the ceilings at the library.

The ceilings in the Nicholson Commons and the Magazine Room were designed by Frank P. Fairbanks, working with Sherwin & Berwin of New York. Renovations in 2000-2002 added a mezzanine level in the Commons to house the music collection and the Saint Paul Collection, which features materials relating to the city's history. In 2002, the room was generously endowed with a $1 million gift from local philanthropists Richard and Nancy Nicholson.

In the stair lobby of the second floor are sculptural friezes, designed by Ulysses Ricci of New York, depicting groups symbolizing Knowledge, Instruction, Science, and the Arts. Other panels in this lobby area mark the creation of the Saint Paul Public Library and the opening of Central Library, as well as offering quotations from the Book of Proverbs.

The Media and Nonfiction Room on the second floor features a large semi-circular alcove framed by elegant columns and arched elements. The ceiling was painted by Lee Woodward Zeigler, the former director of the Saint Paul Institute of Art.

The medallions in the painted ceiling represent the Muses, Graces, Fates, and Furies, while the spaces between illustrate monograms of famous painters, as well as the architect and builders of Central Library. The remainder of the west wing on the second and third floors was entirely redone during 2000-2002 renovations to make the book collections more accessible.

The historic highlight of the third floor is the Magazine Room, also known as the Greenleaf Clark room. A Minnesota Supreme Court Justice, Clark was a major donor to the library's construction.

The room features an elegant, small alcove entered through three arches supported by groups of four columns. The central panel in the ceiling shows the old seal of the library with the sword of St. Paul, symbolizing the city, supported by books and torches. The names of the greatest minds of old Europe, including Homer, Socrates, Descartes, Voltaire, Galileo, and Da Vinci, are inscribed on the ceiling beams.

The Nicholson Workforce and Innovation Center, renovated in 2015-2016, is located across the stair lobby from the Magazine Room. While the Center features high-tech lab and studio equipment, the vaulted ceilings in the entryway reflect the original spirit of the room.

Since construction in 1917, the fourth floor has undergone numerous changes. Today, it houses the Andy Boss Community Room, administrative offices, and the Ecolab Training Room.

The City of Saint Paul and The Friends of the Saint Paul Public Library have funded two major renovations of the building since its construction. A $15.9 million renovation, completed in 2000-2002, was designed by the architectural firm of Meyer, Scherer, and Rockcastle. A donor wall in the entryway lobby acknowledges the contributions of major donors to this renovation effort.

A $1.3 million renovation, completed primarily in 2015-2016, was designed by Lawal Scott Erickson Architects. A donor wall in the Peter J. King Welcome Center lists the major donors to the capital campaign that funded this library and other library renovations.

St. Paul: What's in a Name? Love for a Library and for a Former Mayor (Pioneer Press)

Now It's the Latimer Library in St. Paul (StarTribune) 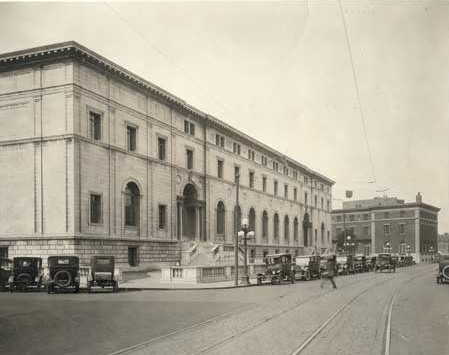