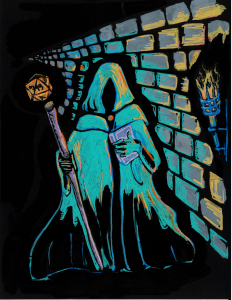 RPGs or Role-playing games have become quite popular. They can be played in groups, as individuals, and as video games. In a RPG, players participate in a story-telling adventure that has clues and quests for them to discover and solve to advance in the game. Many RPGs are based on a fantasy world that can involve dragons and wizards but others can science fiction based in futuristic space or are dystopian survival games for example.

Dungeons and Dragons (D&D or DnD), which was created in 1974, is widely considered the original RPG. There have been various changes and improvements to the game over the years and we are currently in the 5th edition, with some editions being more popular than others.

D&D is a group game where players work together to complete the quest. Each player creates a role for themselves, such as healer, wizard, dwarf, or elf whose characteristics and abilities are outlines in the Player’s Handbook. There is an essential additional player who is the master storyteller called the Dungeon Master or DM. The DM can either use a prewritten quest or create one themselves using the Dungeon Master’s Guide. They tell the other players what the quest options are, helps keep track of player health, and directs players which dice to roll.

There are multiple dice in D&D which help the DM and player determine the outcomes of various decisions they make, whether they fail, succeed, or make progress. The most famous D&D die is the D20 which has 20 sides but regular D6 (6-sided) along with others like D4 are also used.

There have been a number of spin-off games from D&D, like Pathfinder and Starfinder, as well as others that follow the RPG format. Some popular videogames have been Pokemon, Final Fantasy, Legend of Zelda, Fallout, and The Elder Scrolls.

RPGs can have a limited number of players, which are usually in-person tabletop games, or have almost infinite players in what are called massively multiplayer online RPGs, which can be played online with strangers around the world. There is always a risk when playing online games with strangers that other players might not be who they say they are so please practice internet safety and never give out personal information like your real name, age, or address.

Solo RPGS are often meditative and are a great way to hone journaling skills and explore a new gameplay experience.

Solo RPGs start with a rulebook that will outline the gameplay and goals. This will also help set the mood and “world” along with giving the specific gameplay session boundaries. They are then played by individuals using journals, standard decks of cards, block stacking games, or D6 dice to track to game play and add elements of randomness.