The Saint Paul Public Library will be closed on Monday, January 20.

This is part of a series connecting the library's collections with the latest stage productions. Stick around at the end for book lists curated by the library inspired by the upcoming production of The Lightning Thief.

GUEST BLOG BY THE ORDWAY

The Lightning Thief: The Percy Jackson Musical begins with a loud thunderclap, then five performers move to the front of the stage, singing to punchy rock music. It’s a perfect beginning to this clever, hip and irreverent musical, which merges teenage angst with Greek mythology.

Adapted from the first book of Rick Riordan’s popular series of novels, The Lightning Thief tells the story of Percy Jackson who discovers not only that his absent father is the Greek god Poseidon, but that he has superpowers himself. Percy meets and befriends other “demi-gods” and goes on a quest to save humanity from the warring gods. It also becomes a quest of self-discovery.

Check it out from the library

The hit musical is coming to the Ordway Center for the Performing Arts June 18 through June 23 and is the perfect summer fun activity for families and fans of the book.

“Rick Riordan has made an enormous impact on grade school and middle school readers in Minnesota,” said Rod Kaats, the Ordway’s Producing Artistic Director.
“We’re thrilled to present this charming adaption of The Lightning Thief for readers of Percy Jackson books, lovers of Greek Mythology, and musical theater fans. It’s a performance the entire family can enjoy.”

Bookwriter Joe Tracz is a huge Percy Jackson fan, and when he got the job to adapt The Lightning Thief, he had dinner with Rick Riordan and his family.

“He’s so funny,” says Tracz, “just seeing him and his son trading jokes back and forth, it was like: ‘Oh, you’re like grown-up Percy!’”

Tracz says he and his collaborator, songwriter Rob Rokicki, worked tirelessly to find the right tone for the musical.

“They’re big action adventure stories,” he explains, “but they have such a sense of humor and heart to them.”

Rokicki says he wanted to write a varied rock score to reflect the central characters’ personalities: “Percy’s really angsty, so I was going to write on electric guitar.

Annabeth’s really smart, so it was very note-y piano stuff. Grover’s a sweetheart and a little bit of a hippie, so I would do an acoustic guitar kind of thing.”  (It should be explained that Annabeth is the daughter of Athena and Grover is satyr – half human, half goat.)

And when the three protagonists go to the underworld, which is set in an LA record company, Rokicki’s music takes on a Motown vibe.

Creating this wild, epic ride, without the sort of CGI/green screen effects available to filmmakers, required director Stephen Brackett to come up with ingenious staging solutions to tell a story--which features not only gods but mythological monsters. 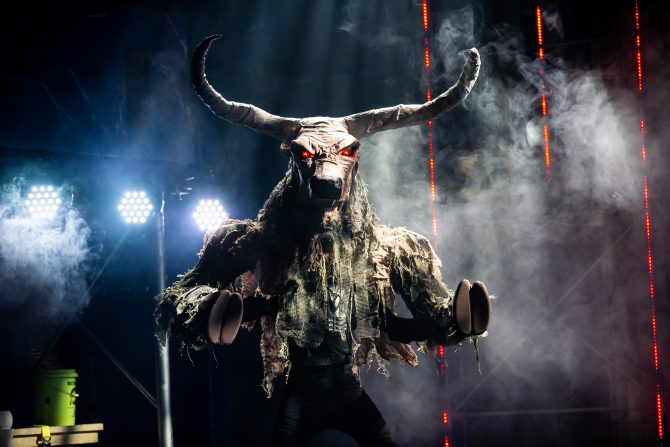 The set has a kind of rock concert vibe, with scaffolding, most of the actors play multiple roles, with multiple costume changes, and the stage magic is frequently visible to the audience.

Audience tip: Keep your eyes peeled for what can happen with a leaf blower and a roll of toilet paper.

“We embrace that you’re actually seeing what it takes to make an effect in front of an audience,” explains Brackett.

When the show played a commercial run off-Broadway in 2017, it attracted not just super fans of the book but musical theater lovers of every age.

Check it out from the library

“We were getting the millennials and families who read the books,” says producer Barbara Pasternack. “And we were getting adults who read fantasy and the comic con crowd, but we were also seeing audiences who had yet to discover Percy Jackson. These people were coming to experience an exciting rock musical and we definitely delivered.”

Tracz says the creative team was always aware of the book’s admirers, many of whom were disappointed with the film adaptations; “We knew that we had to create something that honored what people loved with the books,” he says, “and also surprised them.”

During the off-Broadway run, videos of some of the songs went viral on YouTube. And when the cast recording was released, “It bumped Hamilton and it went onto the Billboard charts and it bumped Bruno Mars and Beyoncé,” Pasternack said.

For the creative team, the themes in The Lightning Thief have broad appeal.

“How do you take action in your life?” says director Stephen Brackett. “How do you advocate for the world that you want to live in? And what are you willing to sacrifice to make that world? I think that’s a story that needs to be told.”

Board books, picture books, and readers that introduce Greek Mythology to young readers.

they match the adventure in the Percy Jackson series. Some feature mythical gods or creatures, while others have magic and other-worldly elements. *All annotations from NoveList.*